Written by Marilia on Monday, January 1st, 2018 No comments 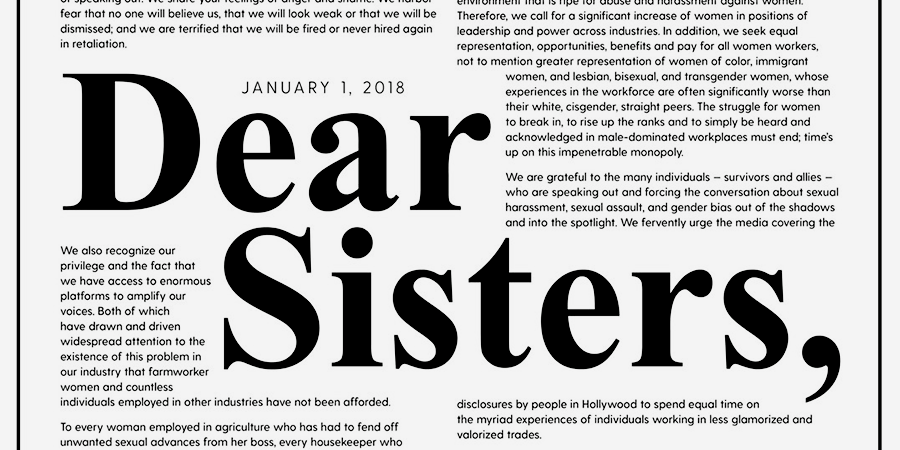 Driven by outrage and a resolve to correct a power imbalance that seemed intractable just months ago, 300 prominent actresses and female agents, writers, directors, producers and entertainment executives have formed an ambitious, sprawling initiative to fight systemic sexual harassment in Hollywood and in blue-collar workplaces nationwide.

Called Time’s Up, the movement was announced on Monday with an impassioned pledge of support to working-class women in an open letter signed by hundreds of women in show business, many of them A-listers, including Brie. The letter also ran as a full-page ad in The New York Times, and in La Opinion, a Spanish-language newspaper.

<“The struggle for women to break in, to rise up the ranks and to simply be heard and acknowledged in male-dominated workplaces must end; time’s up on this impenetrable monopoly,” the letter says.

The group is one answer to the question of how women in Hollywood would respond to cascading allegations that have upended the careers of powerful men in an industry where the prevalence of sexual predation has yielded the minimizing cliché of the “casting couch,” and where silence has been a condition of employment.

Time’s Up also helps defuse criticism that the spotlight on the #MeToo movement has been dominated by the accusers of high-profile men, while the travails of working-class women have been overlooked.

This was highlighted in November, when an open letter was sent on behalf of 700,000 female farmworkers who said they stood with Hollywood actresses in their fight against abuse. Time’s Up members said the letter bolstered their resolve to train their efforts on both Hollywood and beyond.

Join the movement by signing the statement of solidarity and donate now to the Time’s Up Now legal defense fund.