Written by Marilia on Monday, March 12th, 2018 No comments 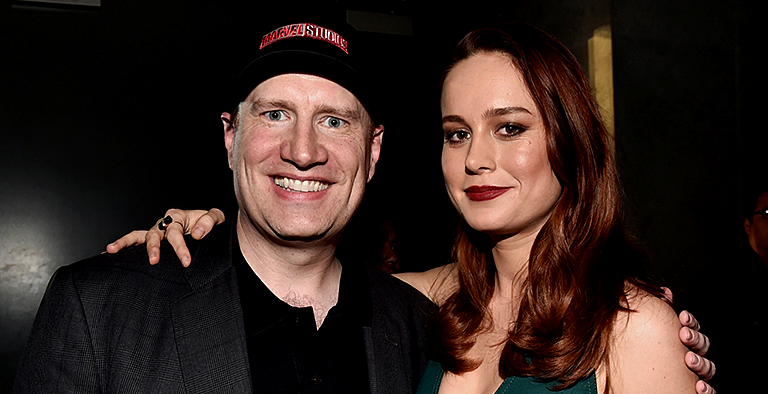 Entertainment Weekly’s March 2018 Issue brought a special interview with Kevin Feige. He talked about the Marvel Cinematic Universe and we got to know a little bit more about Brie’s upcoming project Captain Marvel, which is set to premiere next year and starts filming this month.

What feels like the big gamble now?
Every time you do a film that doesn’t have a part two behind it or wasn’t a sequel. After Iron Man, and certainly after Captain America and Thor, and certainly after The Avengers, Marvel Studios could have made, theoretically, a nice game plan only making sequels to those movies. A lot of studios would love to have four franchises that they can keep doing sequels to. We specifically didn’t want to do that, because we wanted to keep bringing new characters to the forefront, because there’s an embarrassment of riches in the comic books.

Which of those new films felt like risks, felt uncertain?
You look at Guardians of the Galaxy, Doctor Strange, Ant-Man … You look at Black Panther or Captain Marvel, that we have just started filming. One could consider those risks, whenever you’re doing something new and it’s not proven. Doing a third version of Spider-Man. Those are all things that have a certain amount of risk associated with them, but early on we decided we didn’t want to be just the Iron Man studio or just the Avengers studio. We want to be the Marvel Studio.

Years back, you listed all of those new movies as possible projects you wanted to make. Now most of them have happened. So, what’s on your wish list now?
Well, there are lots. There are lots. It’s a testament to the 8,000-plus characters in Marvel Comics. We still haven’t made or developed every character we saw when we flipped through a comic and went, “This would be cool. This would be a good story.”

Such as …?
We’re not ready to talk about what those are, but like the ones we’ve made in the first three phases, they’re ones that are either just great concepts for a film, great characters with great supporting characters, like Panther. New locations and lands that have cultural significance all their own, and continuing to tell stories that represent the world as it is, that represent people who perhaps haven’t seen themselves portrayed in this light in the past. We want to continue to do that.

You have Brie Larson as Captain Marvel, the first female title character in a Marvel Studios film, with Anna Boden and Ryan Fleck co-directing. Obviously, Ryan Coogler directing Black Panther was a landmark for representation. Will you get more women and people of color behind the camera as well as in front of the camera?
Yes. I think we’re seeing it shift from a very purposeful initiative to just a fact of life, to just a way of doing business. Then there are people we hired that we’re not ready to announce in all different capacities, particularly behind the camera. As Panther has so loudly declared, [representation] can only help you, can only help you tell unique stories, can only help you do things in a new, and unique, and fresh, and exciting way. If you do that, audiences will notice it, and appreciate it, and support it.

I wanted to ask you a little more about Captain Marvel. It’s set in the 1990s. How does shifting that timeline back open up new storytelling for the MCU?
We wanted to explore a period before Samuel L. Jackson’s Nick Fury had any idea about any of the other heroes and crazy stuff going on in the world. You know, we first met Nick when he told Tony, “You’re part of a big universe. You just don’t know yet.” Well, we want to go back to a time when he didn’t know it yet, and really showcase and announce that Carol Danvers was that first hero that Nick came across. That meant she could be the singular hero, but place it within timing of the MCU. It also got us talking about different genres, exploring this notion of sort of the ‘90s action film. We hadn’t necessarily done anything like that before either, so there are definitely homages to our favorite ‘90s action films within Captain Marvel.

What defines a ‘90s action film? Like, what would be a few of the inspirations?
Well, not necessarily talking about any particulars of the story, but the action elements Terminator 2. That’s about as iconic as you get, looking at kind of those cool street level fights, street level car chases, and fun stuff like that. That being said, much of the movie takes place in outer space, as you might think a Captain Marvel movie would. Like all of our genre inspirations, there are bits and pieces here and there.

You opened Black Panther with a prologue set in 1992. I wondered if we might expect more hero stories to be set in that time period going forward?
I would say no. I mean, in terms of Captain Marvel and a young T’Chaka in ’92, no. That’s not where we’re headed. But we would talk about the ancestral plane sequence [in Black Panther] where, towards the end of the movie, T’Challa takes the herb again and encounters his father, where he’s like, “Hey, man. We’ve kind of screwed up, and I want to change it.” There’s that moment where all of the ancestors come behind T’Chaka. We would joke and go, “I want to see … what’s their story? What’s that story? Who was Bashenga, the first king of Wakanda? Who’s that third to the left, behind T’Chaka? What was their story in Wakanda in 1938? That would be cool.” It all starts as conversations like that. The more audiences want to see these stories, the more opportunities we have to explore different places and time.